ホーム > 書籍詳細：Victory for Christ - The Story of the Roman People vol. XIV 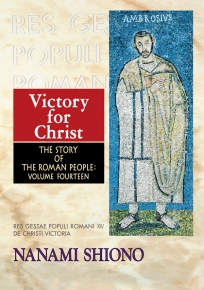 Victory for Christ - The Story of the Roman People vol. XIV

The death of Constantine the Great, a convert to Christianity, is followed by a bloody purge of his relatives. His nephew Julian, one of the survivors, eventually becomes emperor and tries to restore traditional Roman values of polytheism and religious tolerance. But his rule is brief, and once he is gone Christianity becomes the official religion of Empire. This must-read account offers a uniquely Asian perspective on this turbulent period. *CONTENTS*/Preface/Mid-4th-Century Roman Empire/Principal members of the bloodline of Constantine/Chapter One: Emperor Constantius/Chapter Two: Emperor Julian/Chapter Three: Bishop Ambrose/Chronology/References/About the Series and Author

Victory for Christ - The Story of the Roman People vol. XIV