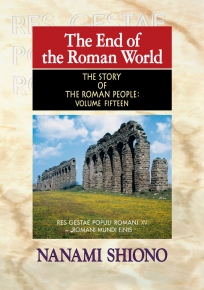 According to textbooks, the western half of the Roman Empire came to an end in 476 AD, while the eastern part lived on until 1453. But is it really possible to pinpoint the exact moment―or moments―when the once mighty empire that spread its civilization to the Mediterranean World vanished into oblivion? In the final volume of Nanami Shiono’s magnum opus, an unprecedented 1,300-year history of the rise and fall of Rome seen through Asian eyes, we bid farewell to the Eternal City one last time. *CONTENTS*/Introduction/Chapter One: The Last Roman/Chapter Two: The Fall of the Roman Empire/Chapter Three: Post Imperium/To Readers/Appendix I: Changes in the Roman Empire seen through its coins/Appendix II: The Romans’ basic morals (mores maiorum)/Appendix III: Rise and Fall of the Byzantine Empire/Chronology/References/About the Series and Author